Walmart wants to make sure you’re happy when you’re shopping in their store. They’re developing facial recognition technology that detects unhappy or frustrated customers. The technology uses security cameras to watch customers’ facial expressions and movements while they’re at the checkout lines. From there, the technology will attempt to identify varying levels of dissatisfaction to make a decision.

Walmart already filed the patent for their retail-based technology back in 2012. “A customer service action may include an alert transmitted to a representative of a merchant,” the patent says. “[Or] a customer service action may … include a message transmitted for display to an on-call employee, the message instructing the on-call employee to come to the store.”

It will also try to notify employees working in other parts of the store to handle a customer’s frustration. The employee will show up at the register and try to fix the problem. Walmart executives hope that immediately solving problems in-store will help decrease the rate of complaints overall.

This sentiment is echoed in the patent filing: “It is easier to retain existing customers than acquire new ones through advertising. Often, if customer service is inadequate, this fact will not appear in data available to management until many customers have been lost. With so much competition, a customer will often simply go elsewhere rather than take the time to make a complaint.”

While some customers will stay loyal to Walmart after a particularly bad experience, this technology is not a guarantee that customer retention will increase.

Other Uses For Facial Recognition Walmart will use the data to address immediate staffing needs, too. If customers are unhappy because there aren’t many cash registers open, Walmart can fix this problem.

The retail giant also hopes to use the facial recognition to analyze trends in shoppers’ purchase behavior over time. According to the patent filing, to analyze purchasing behavior, the system links customers’ facial expressions with the customers’ transactions. By analyzing how much customers are spending and what they are buying, Walmart hopes to correlate the customers’ “biometric data”( i.e. facial expressions) to purchase history and intent.

Walmart says this will help stores detect changes in a customers’ purchase habits due to frustration. As the patent filing explains further, “Significant drops or complete absence of customers spending … may be identified.” Walmart previously tested facial recognition technology back in 2015. However, they abandoned the program because it was ineffective. The corporation tested the technology in an undisclosed amount of stores to detect shoplifters and prevent theft. Walmart scrapped the idea because their customers raised several issues with privacy.

These days, there are several Walmart locations testing touch screens which allow customers to process their own returns. They’re also testing touch screens that show shoppers comparisons between gadgets like Wi-Fi-connected speakers. This is usually a sales associate’s job, but now there’s no need for the associate to retain all of that technical knowledge.

“We don’t need an associate to understand how that works, but the associate is there to service customers and check them out,” said Judith McKenna, Walmart’s U.S. COO.

Walmart: Then and Now 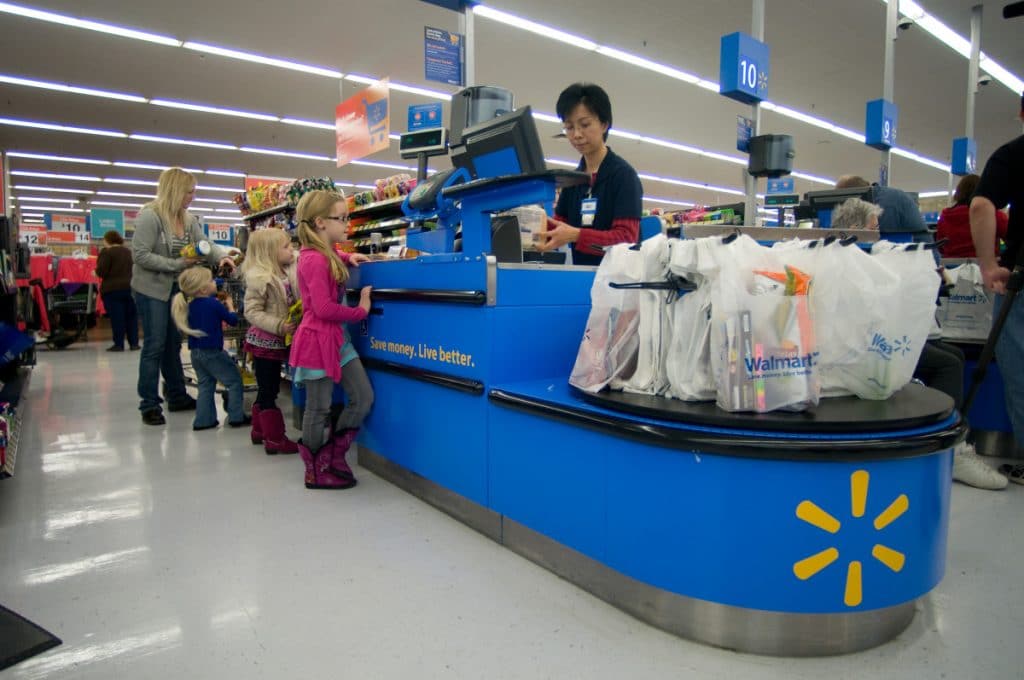 For years now, most retails have had self-checkout registers installed for their customers. Walmart is rumored to be replacing cashiers with self-checkouts. The automated cash registers are becoming a larger part of the store’s checkout process.

There is also the matter of the Cash360 machines, which are now in almost every Walmart across their 4,700 U.S. locations. The machine counts eight bills per second and 3,000 coins a minute. It also uses software to predict how much cash is needed for that day. It will then digitally deposit money at the bank in an instant, which is obviously faster than using the old-school armored car.

Before the Cash360 machine rolled around, employees counted cash and tracked the store’s bookkeeping for $13 an hour. Now, thousands of those employees are unnecessary. Those workers now work in positions that boost Walmart’s customer service. Even so, 500 of those employees left the company. And now, with the growth boom of delivery services, Walmart’s open positions are shifting to support their new grocery pick-up for online orders.

While Walmart is working on a lot of technology to boost their customers’ experience, it’s not clear how well any of these initiatives are working. Some chalk these efforts up to Walmart’s rivalry with Amazon. The e-commerce company has been causing problems for Walmart for years, with their latest move to encroach on Walmart’s physical advantage by opening up their own brick-and-mortar stores.