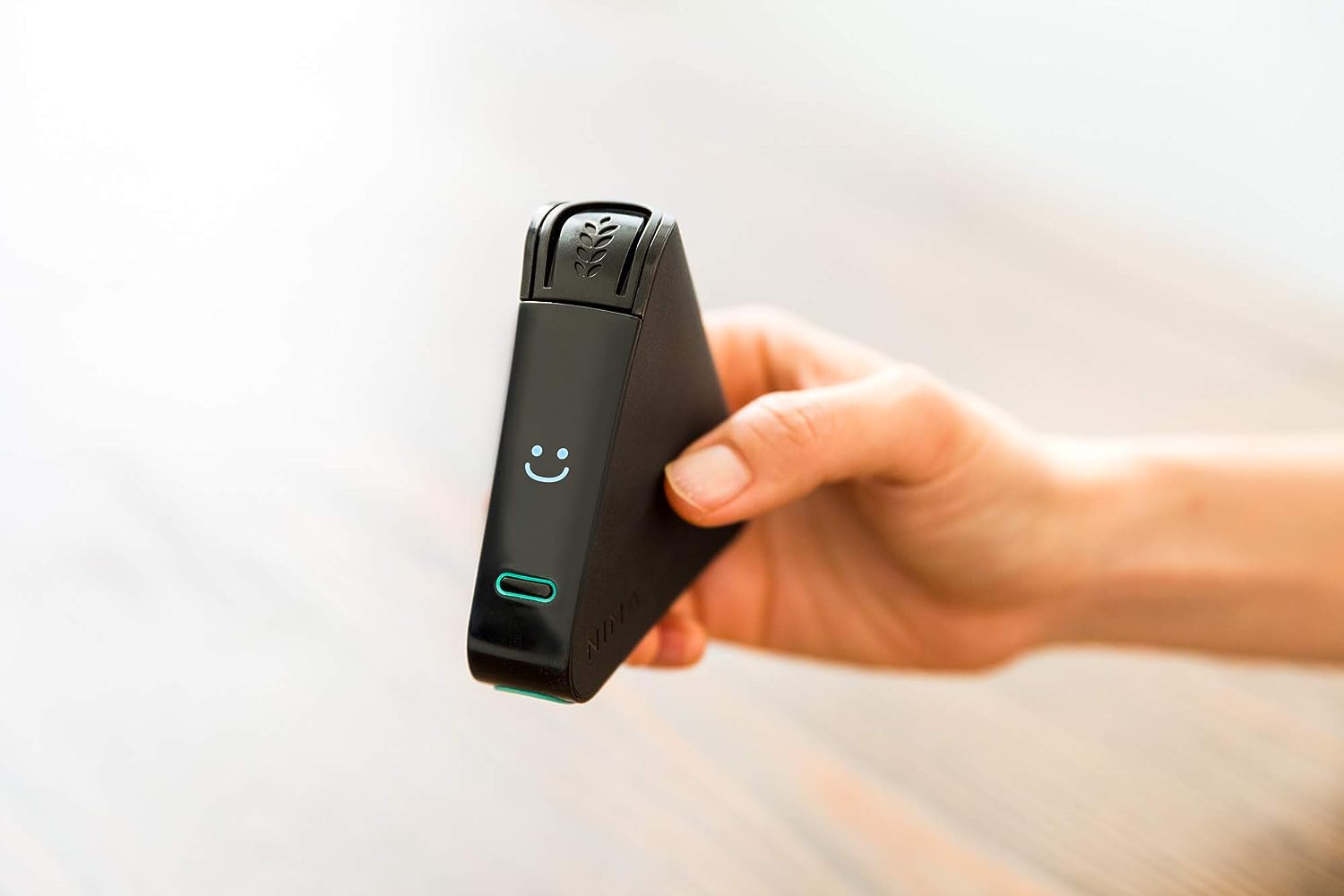 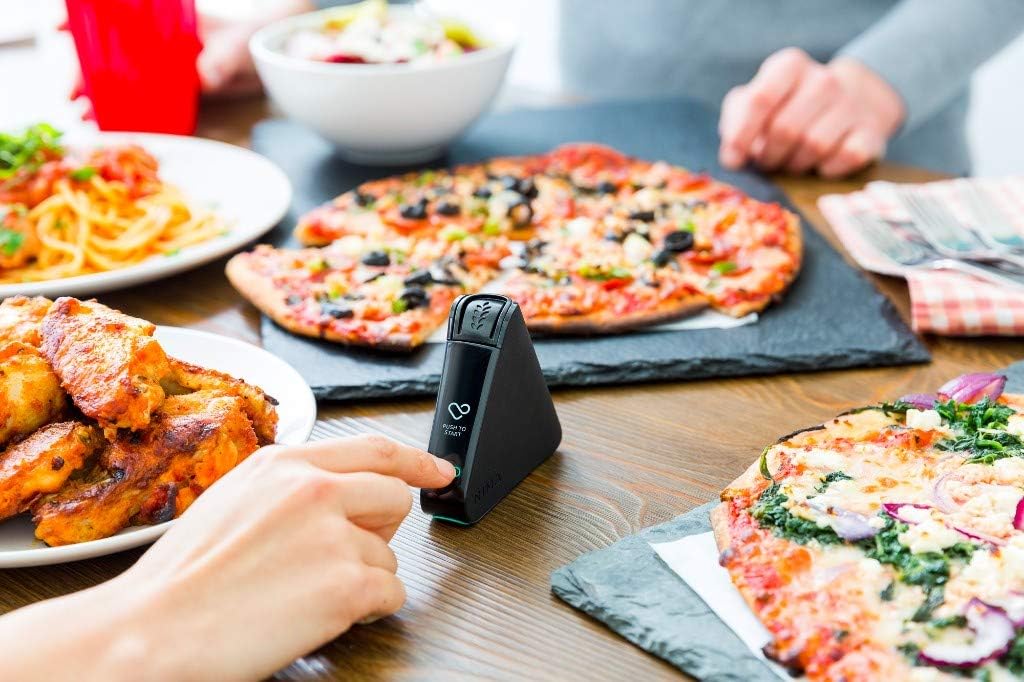 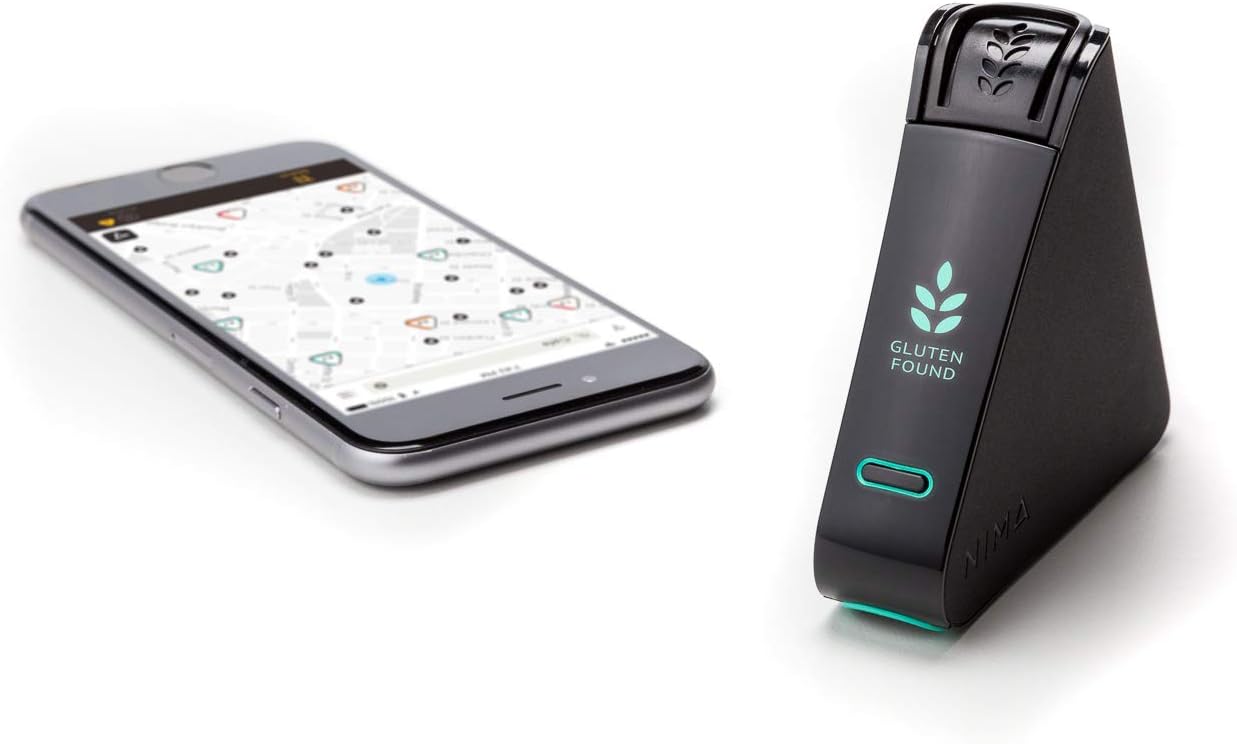 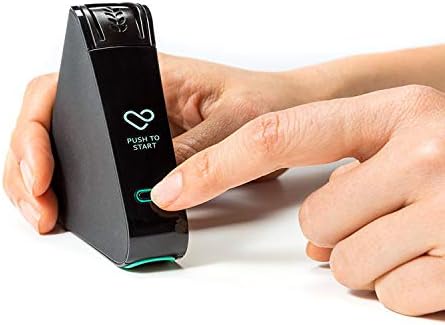 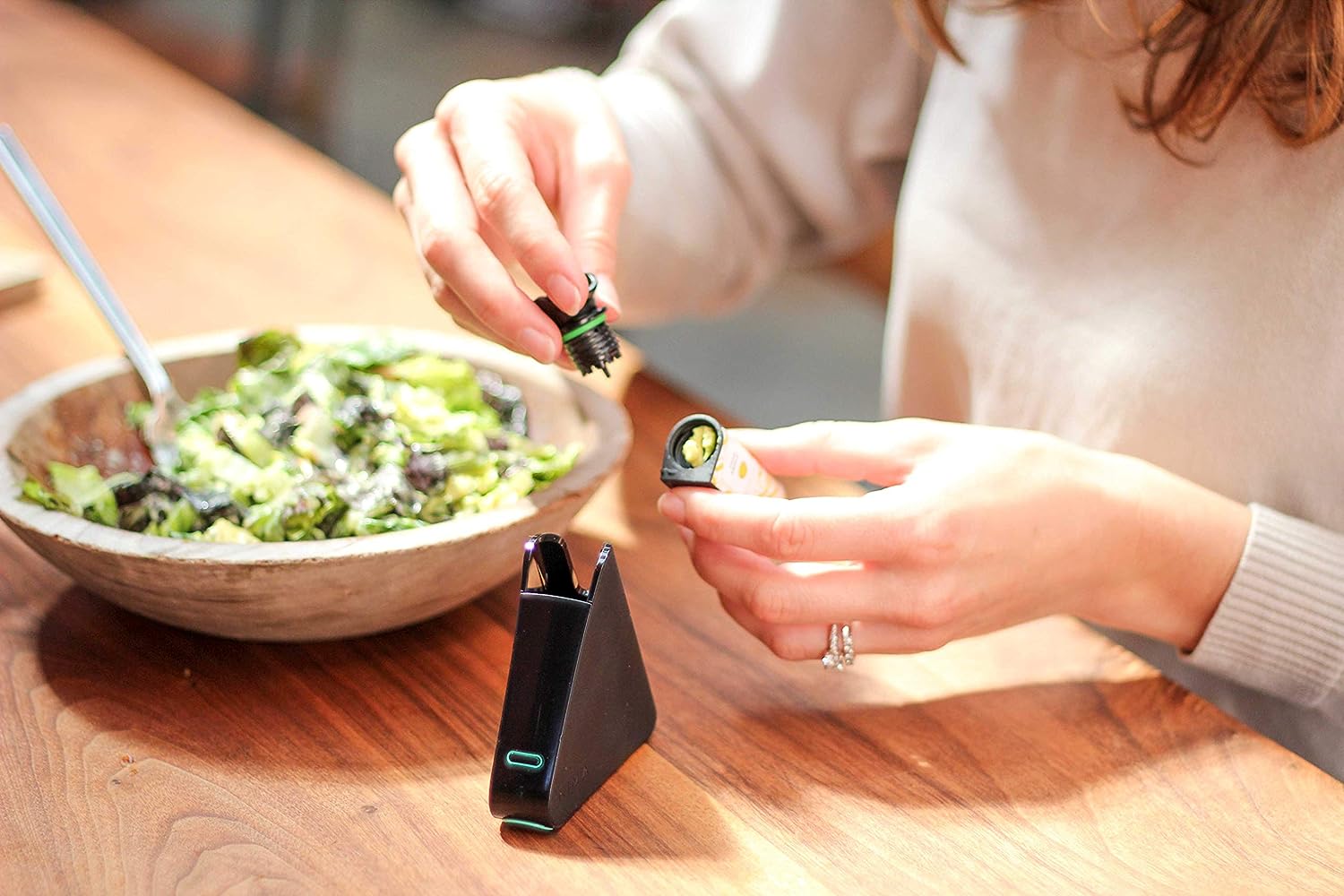 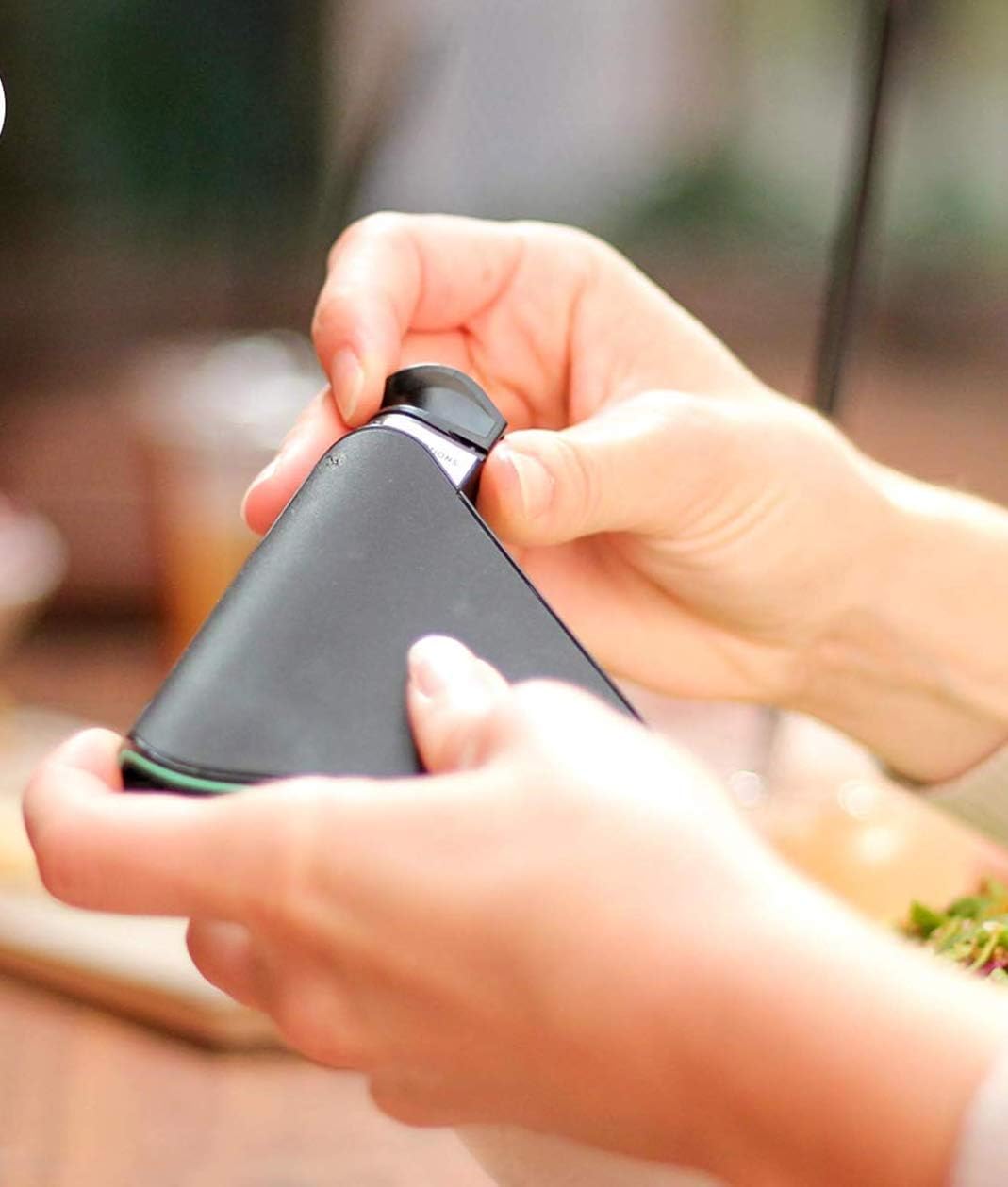 Nima is small enough to be discreet, giving users peace of mind in social settings.

The process is simple: take a small, pea-sized amount of your food (solid or liquid) and put it inside a fresh capsule. Screw the top on and watch the green ring disappear. Then simply slide the capsule into the sensor until it clicks. Hold the power button until the device turns on and press the button again to test your food.

Within 2-3 minutes, the Nima gluten sensor displays your results. The smile ensures that less than 20 ppm of gluten was detected in the sample. The FDA states that food is only considered gluten-free if it contains less than 20 gluten parts per million. If the device shows one wheat stalk, there is a low level of gluten present, while two wheat stalks mean that the item contains high levels of gluten. An exclamation point reveals that the test was inconclusive.

A team from MIT, Stanford, Google, and Nike worked together to develop this gluten sensor. With some of the most respected brands I the world working together, it’s no wonder the device looks like a sleek gadget and runs the world’s fastest gluten test.

Nima also pairs with an app compatible on iOS and Android, which can be used to track gluten tests and see crowd-supplied data for safe restaurants, meals with low gluten, and more. The app can also estimate the gluten level present when you the device reads one (20-100 ppm) or two-wheat (over 100 ppm) stalks.

Nima, like other allergen tests, detects gluten by attaching a proprietary antibody to the sample of food. The company spent a year developing a custom antibody for this product. Yet, the test results can only tell you if the food you sampled contains gluten, not what is on the rest of the plate. To test other items, you’ll need to start a fresh capsule.

Because Nima only shows ranges through smiley faces, wheat stalks, and exclamation marks, it’s not 100% accurate. Nima explicitly warns customers that this is a decision-guiding tool, not a test consumers can rely on to ensure ones life.

The company estimates its accuracy at 99.5%. In internal tests, Nima showed it can detect gluten levels as low as 5 ppm.

Right now, Nima’s antibody cannot reliably test soy sauce, pure vinegar, beer, alcohol, and other fermented or hydrolyzed foods. These foods have much smaller gluten proteins, making them more difficult to detect. If gluten is added to any of these foods, however, Nima can successfully operate with the food sample.

So far, the Nima gluten sensor has not been used to test non-foods, such as makeup or medication.

The Nima app’s concept of social sharing is a lifesaver for those with fatal allergies to gluten. The app asks important questions such as, the restaurant name, food ordered, whether you told the waitstaff that the food must be gluten-free, and more, that can then be shared with others.

Nima has a 300-mAh LiPo battery, similar to smartphones and other devices. One charge will suffice for 10-30 tests. Lower gluten foods take more battery power than higher gluten content, which explains the range of tests available per charge. However, to recharge, you’ll have to wait over 90 minutes for full battery.

Regrettably, capsules are not recyclable. Adding to the fact that they are one-time use and cost $5 each, the monetary and environmental impacts of this device are pretty large.

Depending on how severe your gluten intolerance is, you may want to wait until Nima lowers their prices. Nima is currently on sale for $199, with a promo discount including 12 free capsules. Without this sale price, Nima normally costs $279. And, as mentioned above, each non-reusable capsule is roughly $5. Not everyone can afford this device, but it may be a great solution for those who can.