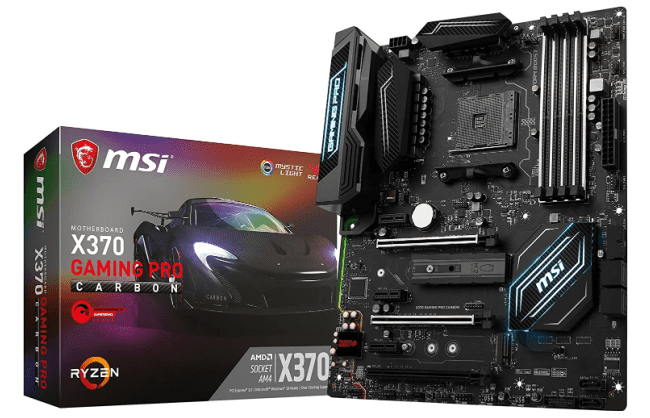 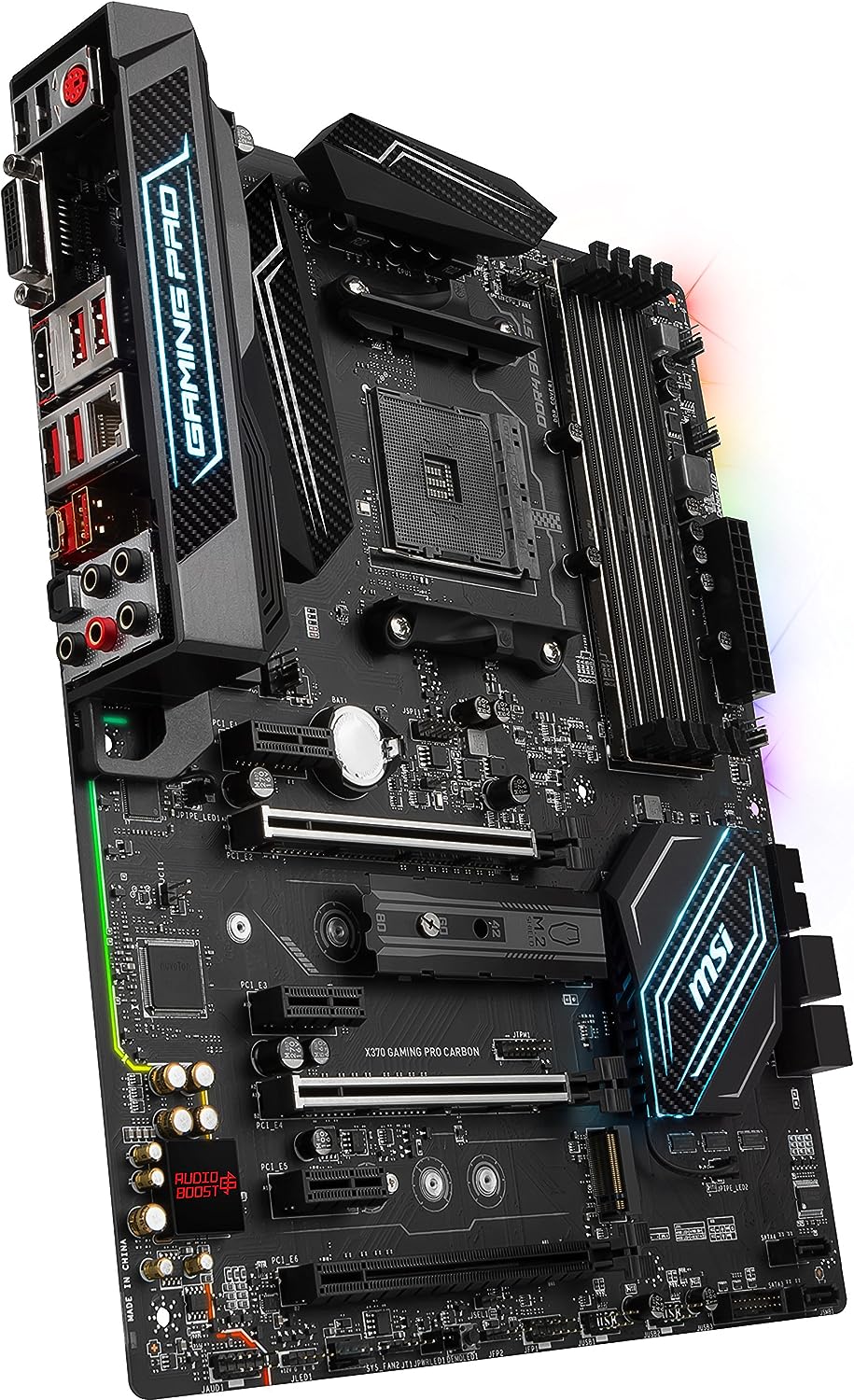 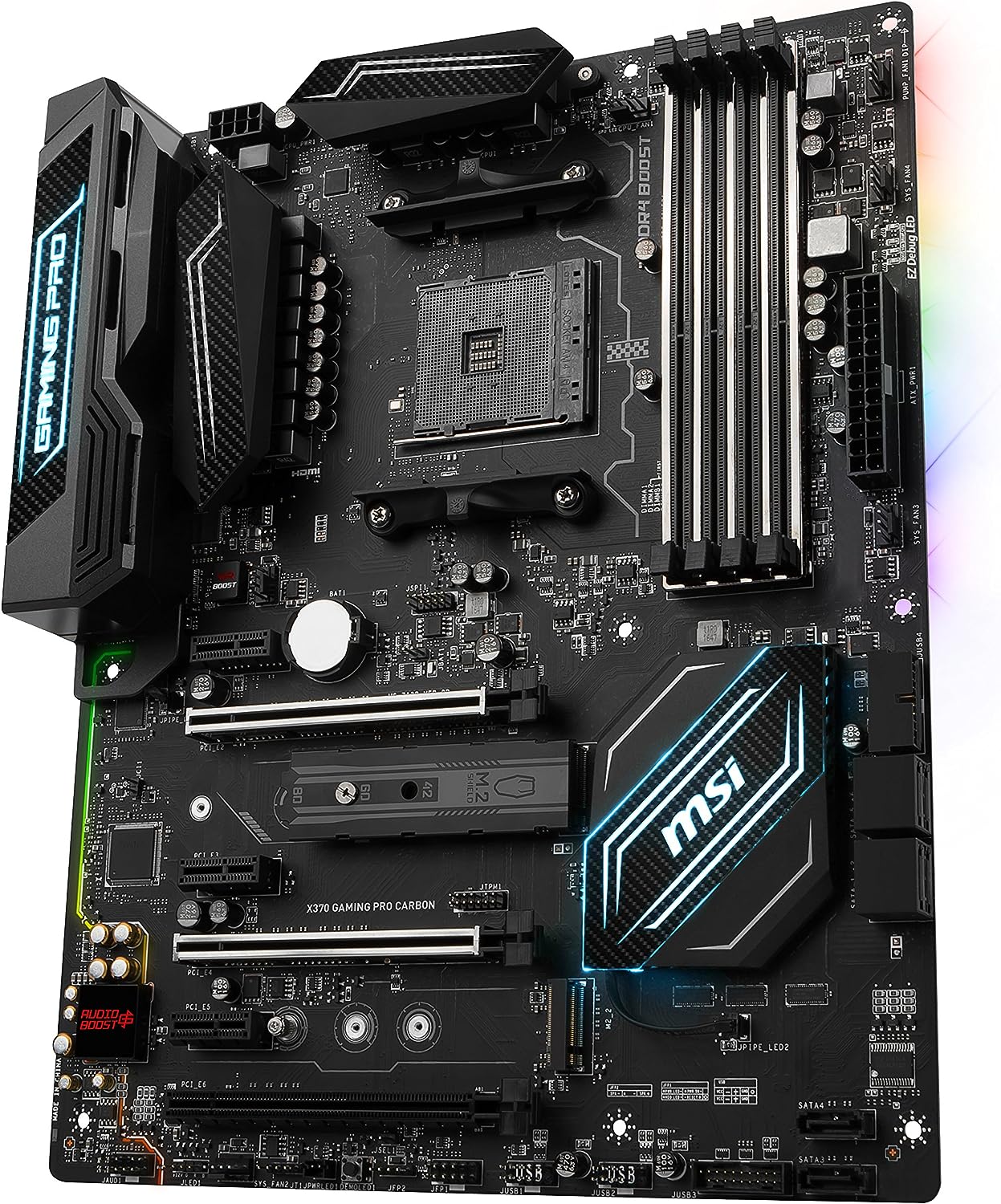 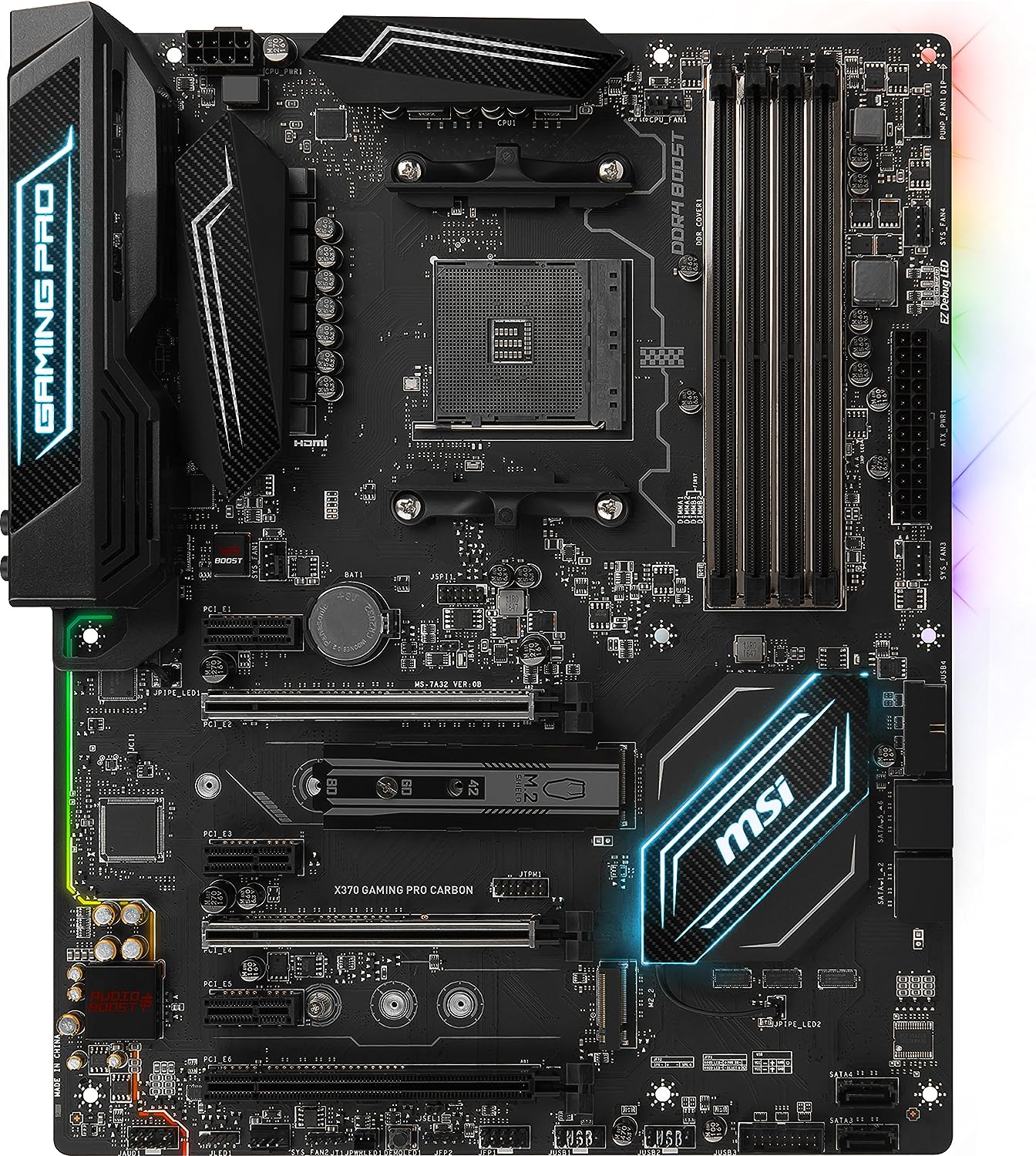 Out of all the parts of a PC, I believe the motherboard is one of the most important ones that is hard to pin down. They don’t come with the same flashy marketing that a lot of graphic cards have, yet they are instrumental in getting a high-quality computer running.

That leaves the question of what might be a good option for a Motherboard? I think the MSI X370 Gaming Pro Carbon motherboard, and those like it, is a solid, high-performance option for those interested in using an AMD processor.

Designed with the AM4 socket, this motherboard is made for utilizing the next-gen AMD Ryzen series processors. With a host of features on par with comparable products, the MSI X370 Gaming Pro Carbon is a great option for productivity and gaming alike.

While the MSI X370 Gaming Pro Carbon might not be the most innovative product on the market, I would still call it a solid motherboard. It has a standard cooling setup with 6 fan headers, DC or PWM mode, real-time monitoring, and water-cooling support. All the basics cranked up to create a motherboard that will maintain itself well.

MSI Steel Armor is found on a variety of components throughout the board. This addition protects the PCIe slots and motherboard from particularly heavy graphics cards. This also helps ensure a clean signal for the PC’s memory, and even protects any M.2 card that it may be using.

Motherboards are always interesting when they come to their design in my opinion. Considering where they’re meant to be placed they tend to be entirely all function with no fashion. What I’ve learned over the years is that a motherboard that tries hard to stand out in a visual sense probably won’t do you any good.

Aesthetically, the MSI X370 doesn’t commit any sins with how it looks. It’s no more or less visually appealing than any other quality motherboard and doesn’t feature any remarkable physical characteristics that would trap heat or take up too much space. Aside from the RGB LED there isn’t anything of note, and that’s a good thing.

The board itself is entirely matte black and with similarly colored components. This does mean it’s difficult to immediately identify individual parts, but after installation locating specific parts on the motherboard itself is rarely needed.

As I said, the MSI X370 Pro Carbon comes with a highly customizable onboard RGB LED lighting suite. MSI’s RGB Mystic Light offers the standard options found on most contemporary motherboards. This includes various LED areas on the motherboard, many different lighting effects, and easy customization from the MSI Gaming or smartphone app.

If you want even more lighting options, you can add an aftermarket RGB strip to the Mystic Light Extension pin header. This, along with many other RGB LED products, can be synchronized and controlled with the Mystic Light sync feature.

All together the RGB craze is here, but not a component that is forced down your throat to the extent of other motherboards. What I care most about is that it doesn’t get in the way of the major functions of the motherboard and doesn’t add much to its size. If you like a little bit of a light show it’s a nice extra detail for you

There are a few features that I want to touch on with the MSI X370 Pro Carbon that further the experiences it can offer. To start, the MSI Audio Boost delivers quality onboard sound that lets consumers enjoy an immersive, game-changing sonic experience. Audio Boost is physically isolated from the rest of the motherboard circuitry to decrease the likelihood of signal interference as well.

Additionally, the left and right audio channels have their layers within the PCB to help ensure sound quality. Along with this, De-pop protection, 120dB SNR, and a dedicated headphone amplifier are also onboard to maintain the best audio experience. There is a decent amount on offer when it comes to the additions to audio.

Other important features include DDR4 memory, multi-GPU support, scalable mouse-controlled graphical BIOS, USB 3.1, a USB-C connection, EZ Debug LED, Intel® powered GAMING LAN, VR Boost chip, and a variety of software solutions to boost your performance. There is no onboard Wi-Fi, so you either have to stick with Ethernet or install your Wi-Fi card.

This covers most of the MSI X370 Gaming Pro Carbon’s key components. Most of them are basics that I’m happy to see aren’t cut in favor of some more minor improvements. There is nothing groundbreaking here, but also nothing missing or obnoxious.

With everything I’ve talked about so far, I think it’s a good idea to line up the pros and the cons that the MSI X370 Gaming Pro Carbon offers. I want to allow the most informed choices possible to be made, so I’ll be giving what I think are the biggest things for and against it.

With the MSI X370 Gaming Pro Carbon, I see a lot of reasons to like it a not a lot to hold against it. Motherboards are complex pieces of hardware, but deciding if one is good or not boils down to the simple question of how well it performs.

There is little to hold against the MSI X370 Pro. It has everything it needs properly rigged inside, doesn’t clutter itself with too many unneeded additions on the hardware, and it holds itself well. It won’t be the best on the market forever, but computer parts are advancing so fast that nothing will stay at the top for more than a few months.

If you’re looking for a motherboard that gets the job done, isn’t the most expensive thing on the market, and gets all the simple parts right, then I recommend the MSI X370 Gaming Pro Carbon to you. You might not notice it’s there after you install it, but I’ll tell you that the only time you notice your motherboard is when something is wrong with it.