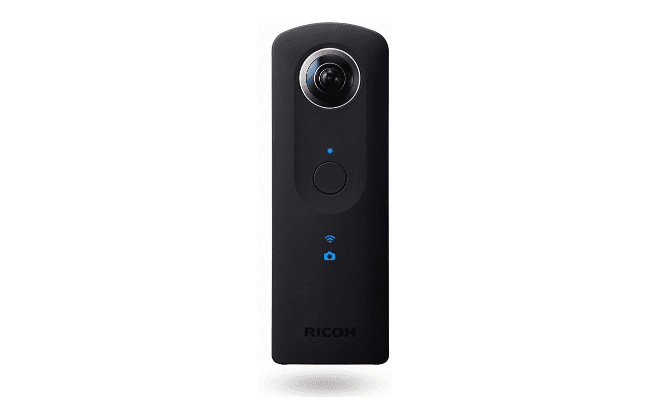 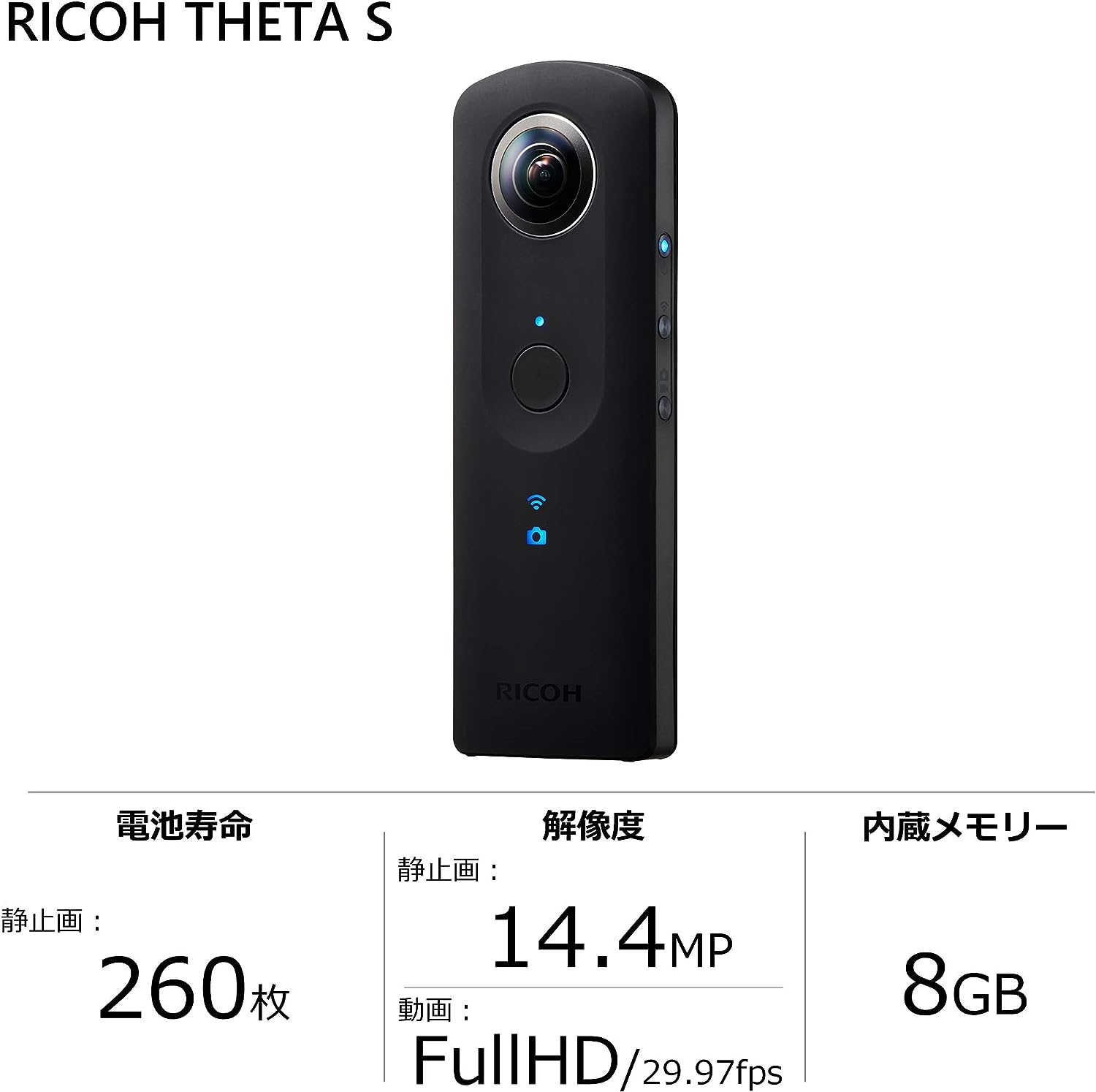 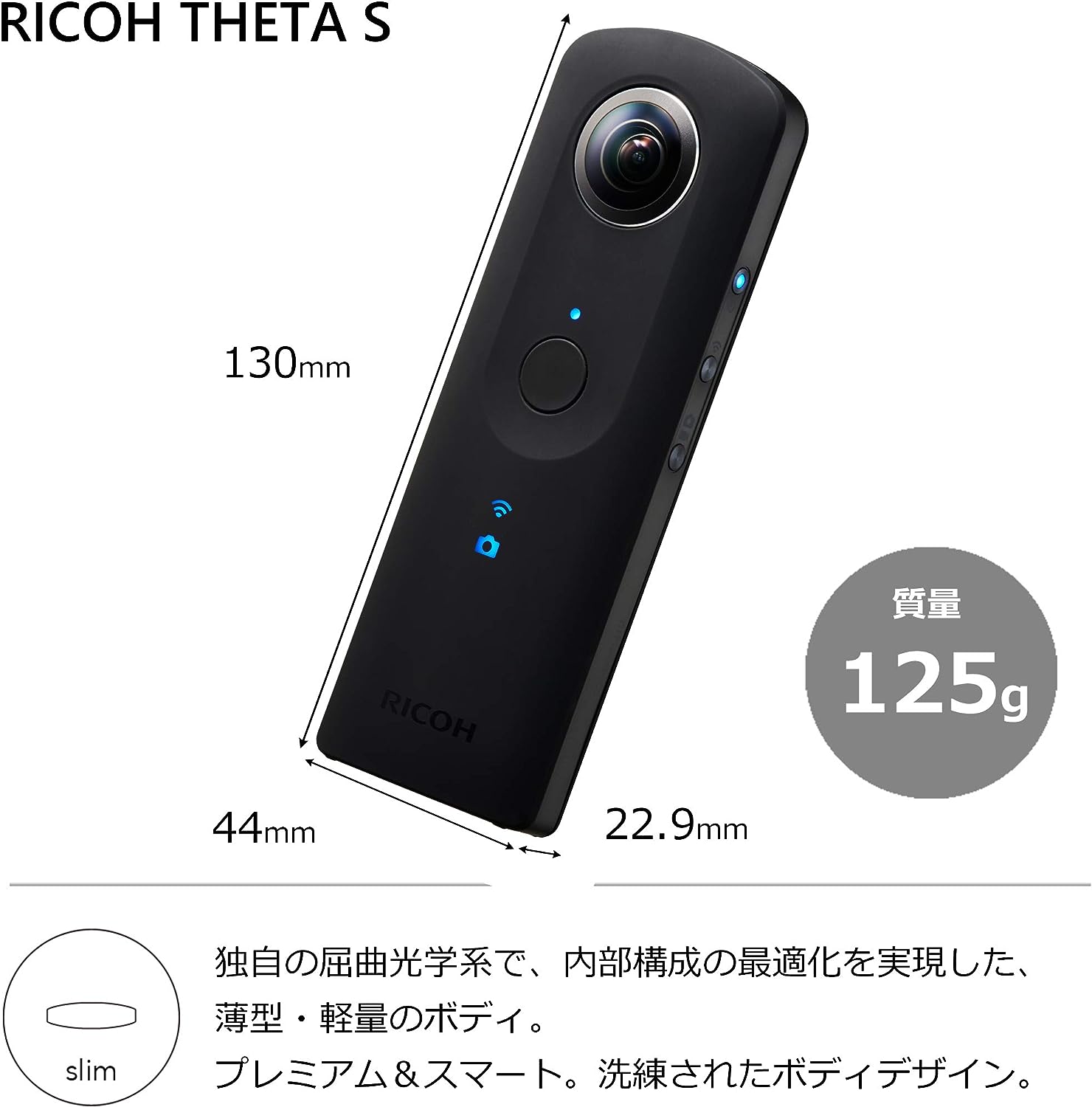 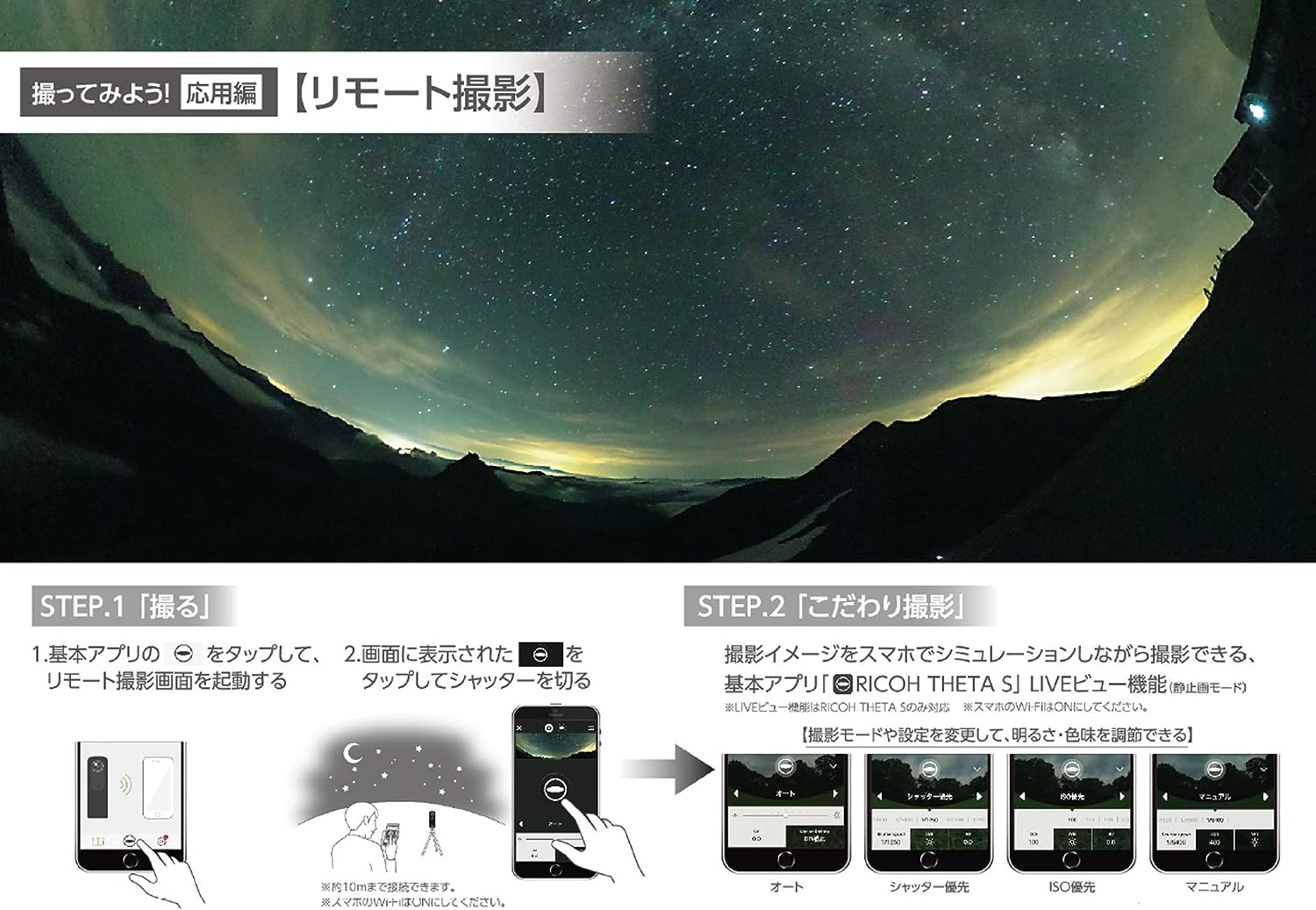 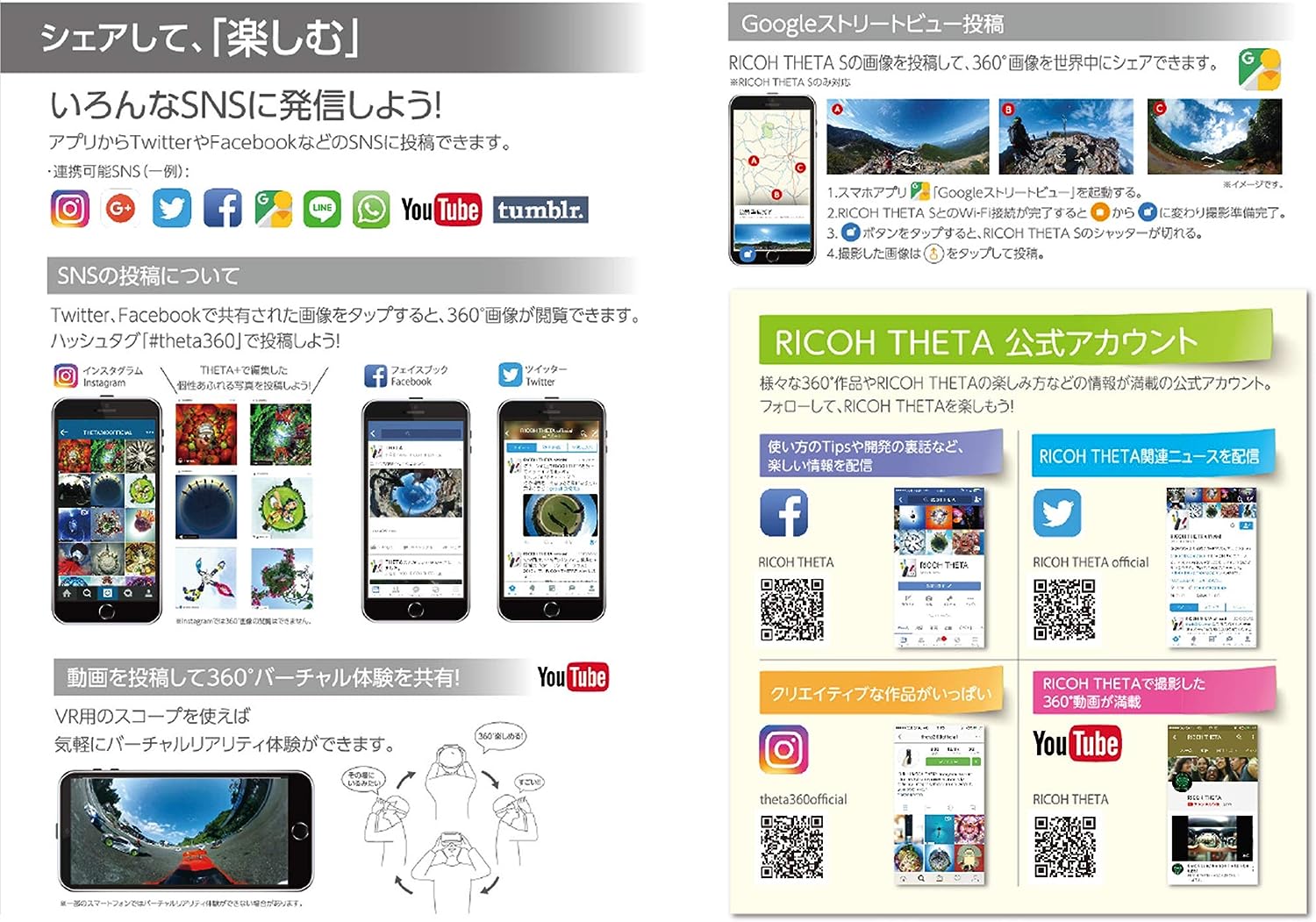 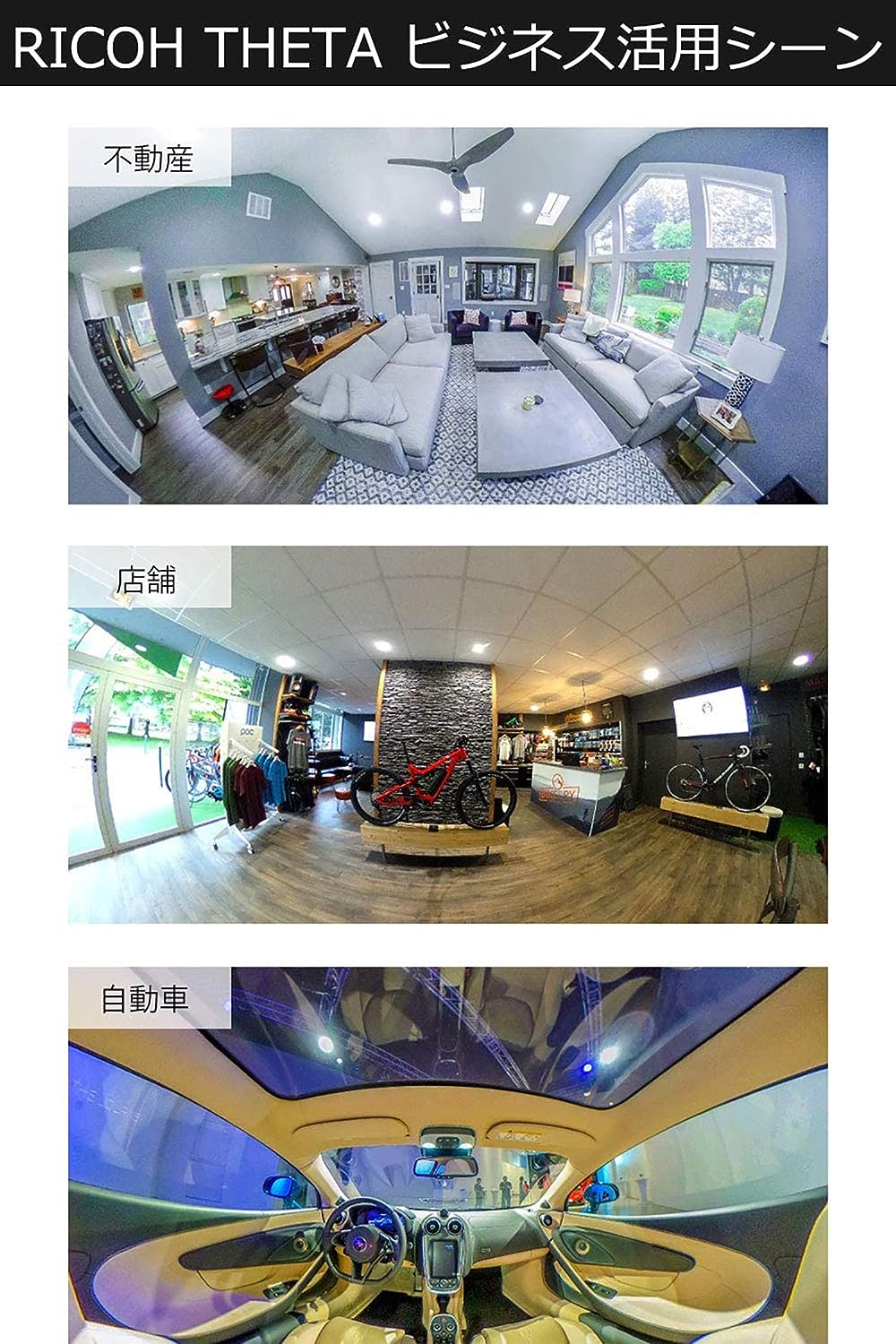 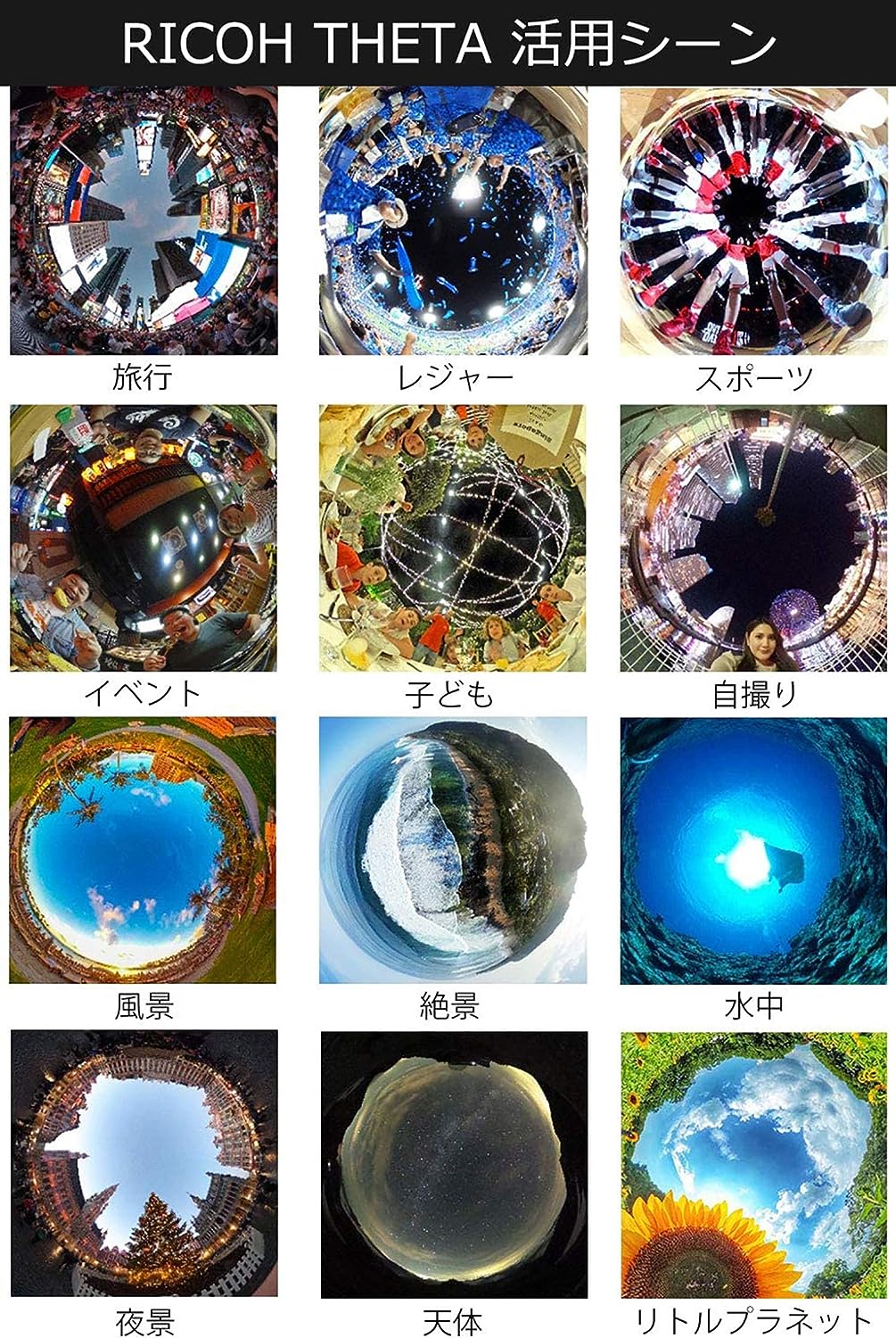 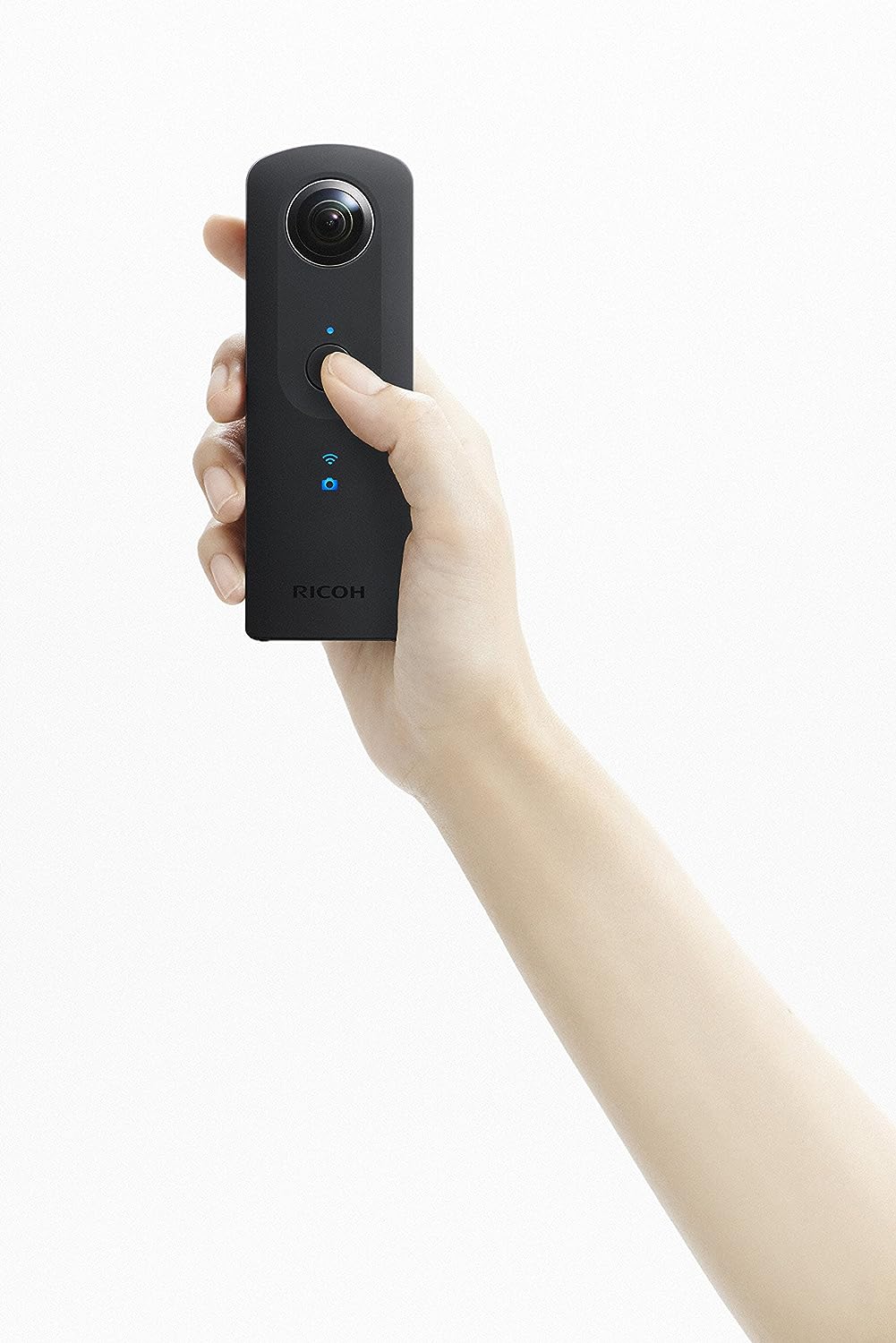 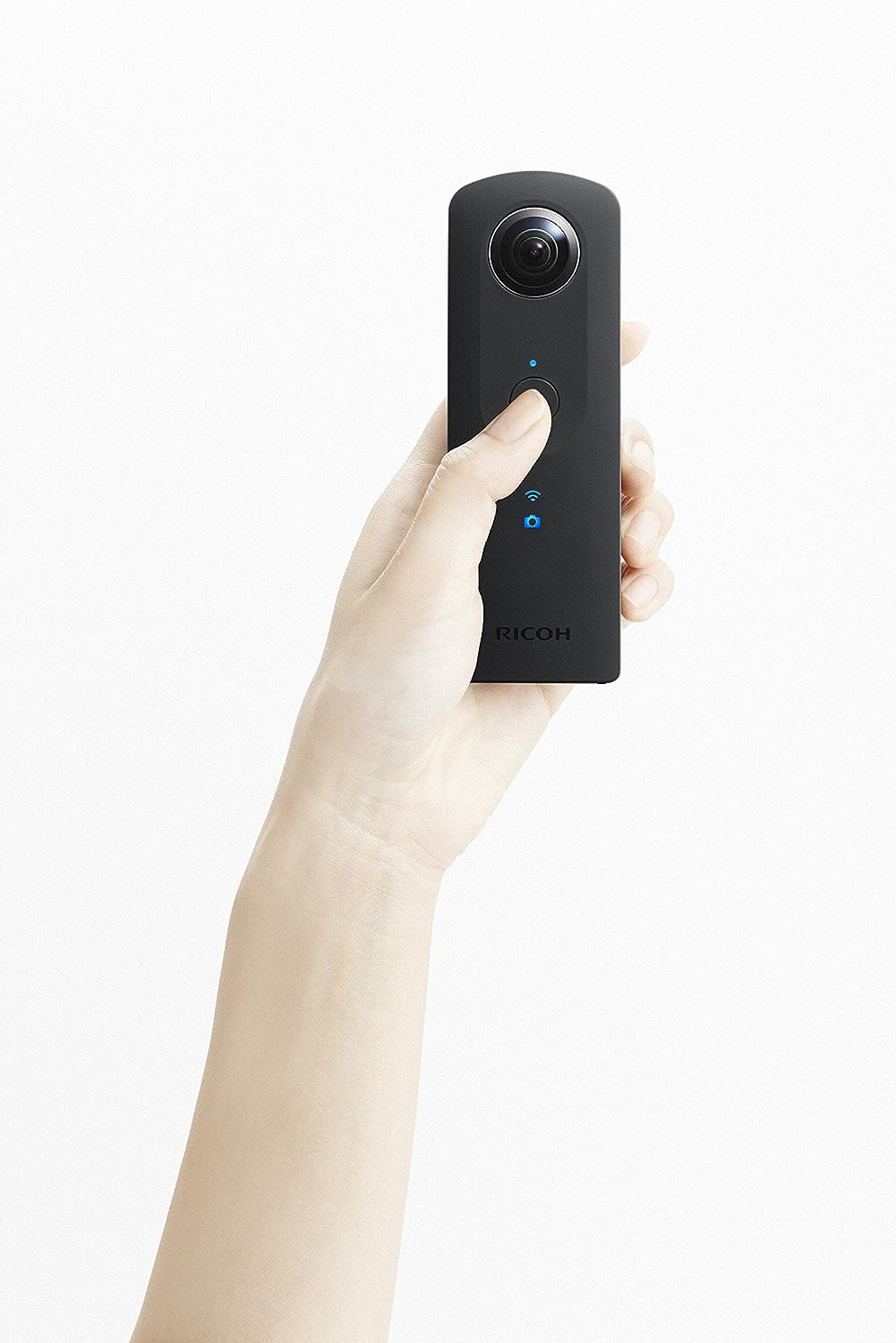 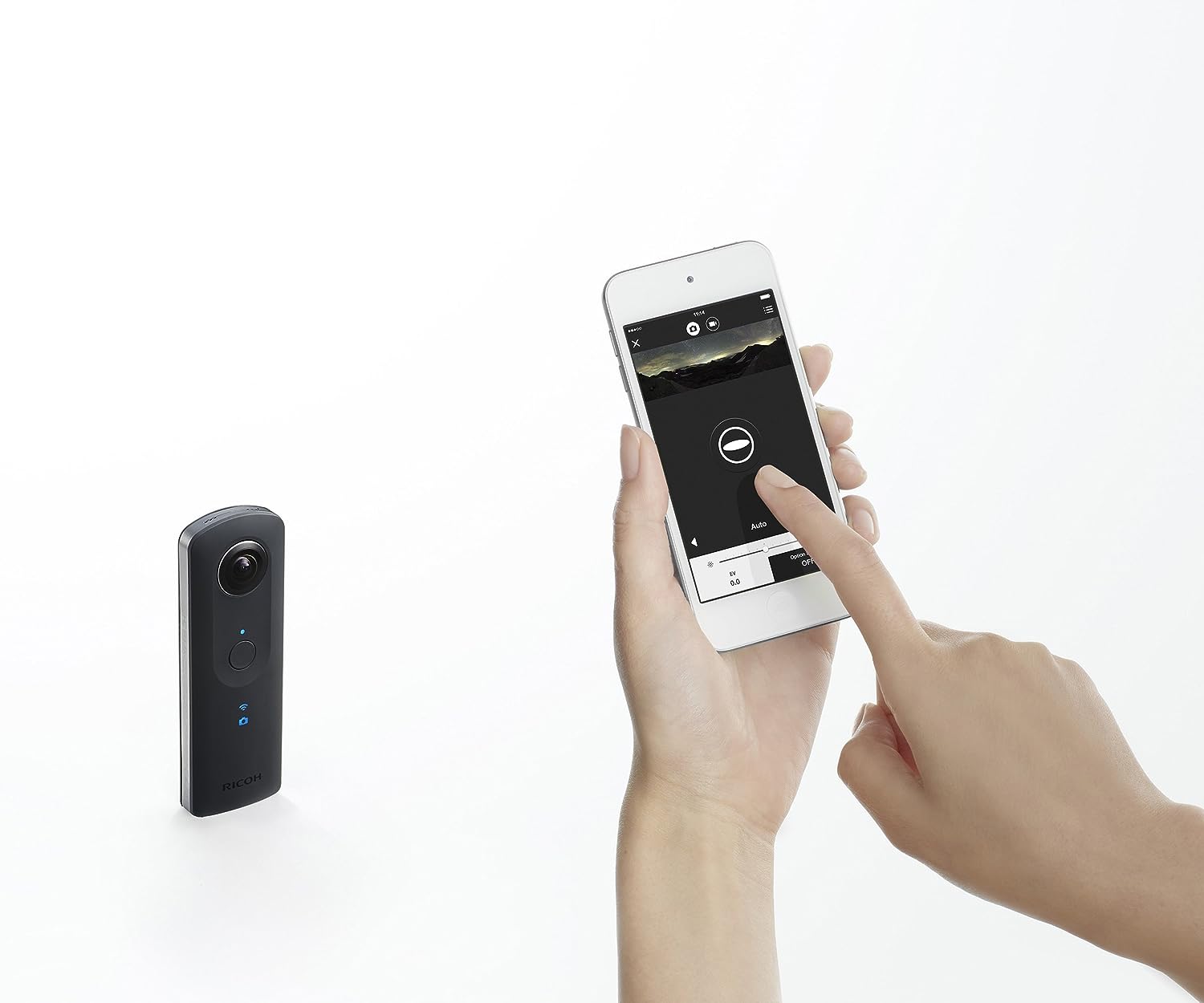 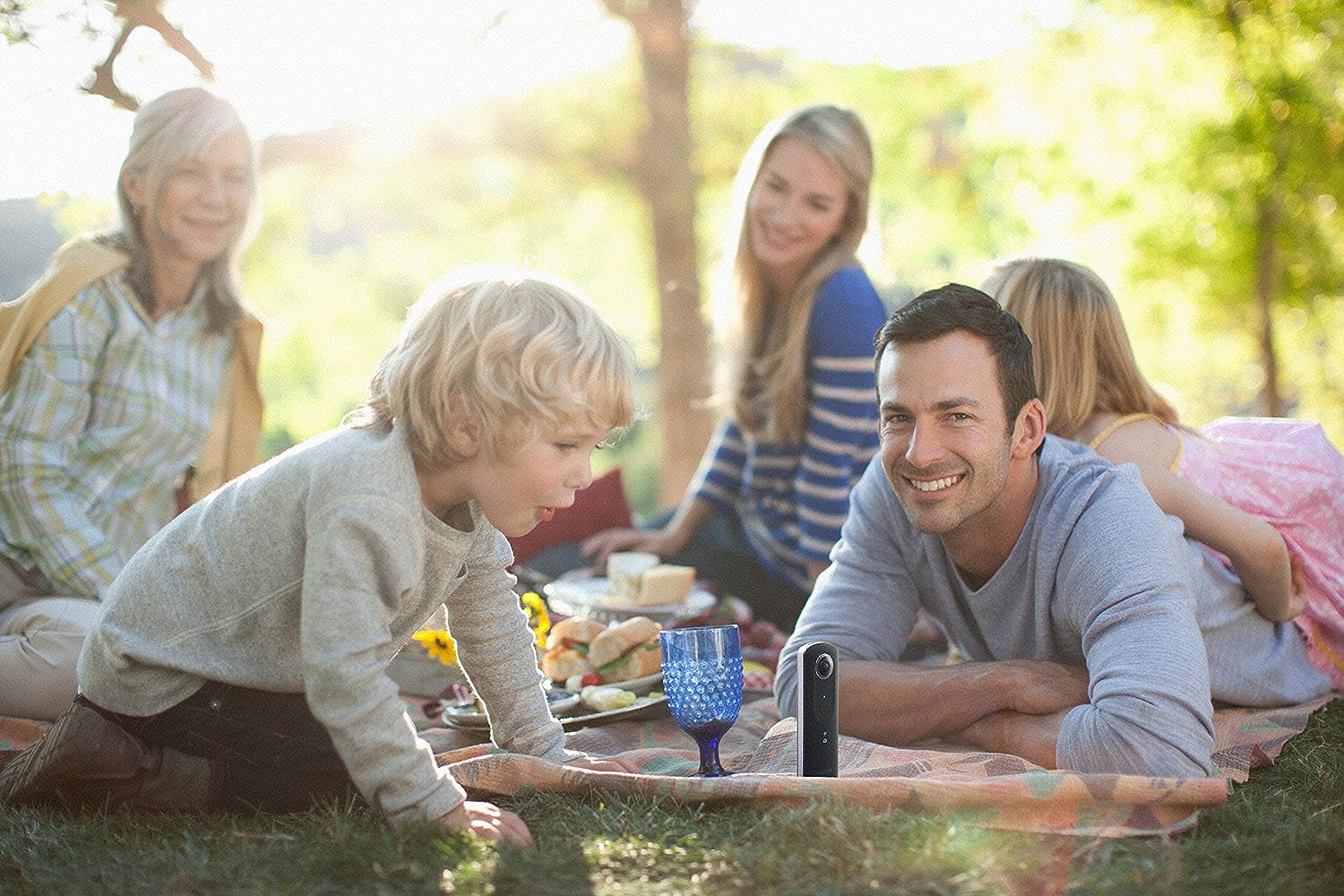 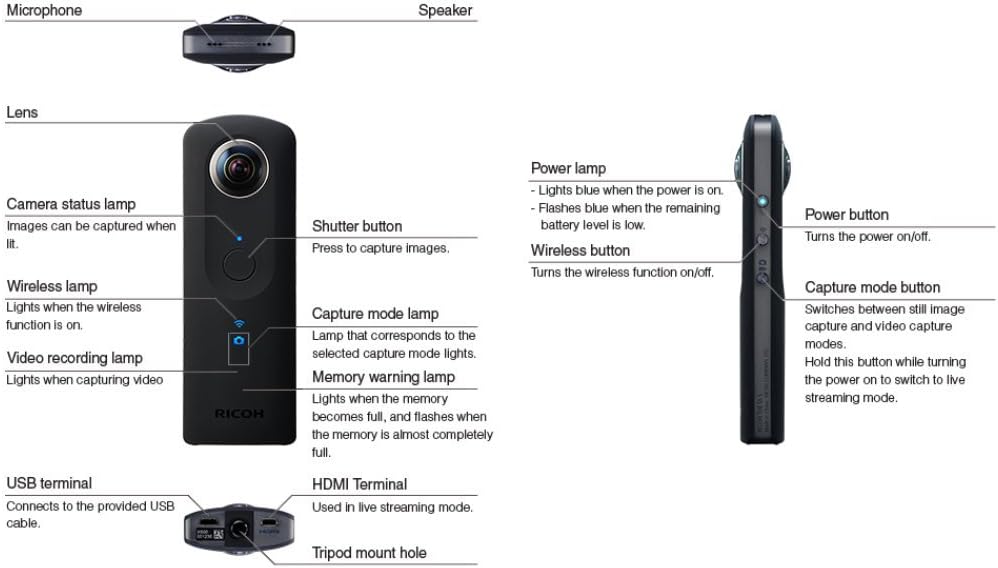 I know there is a lot to consider when it comes to buying a new camera. It needs to have a good use for its price range, be versatile, and simply be an option you would consider over something as simple as a phone camera.

That’s where I see products like the Ricoh Theta S come in. Its consistent high ratings on the market make it a good example of a high-quality camera that will fit the needs of several people who are looking for photos with more options and power than other cheaper alternatives.

Equipped with two all-new F2.0 lenses with folded optics, the Ricoh Theta S is well known for taking spherical images in one easy-to-take shot. All it takes is simply pressing the shutter release to record the action.

There’s is much more to look at even in this quick review. That’s why I want to look at the technology that has been put into the Ricoh, the design, and a few other tidbits I feel are important to look at.

The technology behind a camera I know is the most important aspect of how well it will function. This is why I wanted to take a deeper look into what makes the Ricoh Theta S tick.

The Theta’s ability to capture full HD-quality footage is rather impressive. With it touting a resolution of 1,920 x 1,080 pixels at 30 fps it’s a decent camera option. There is plenty left to be desired with it having up to 25 minutes of recording time, but for still images, I find few would say it doesn’t work great.

One of the features that differentiates the Ricoh Theta S from other 360-cameras is its customizable shutter speed. From 1/6400 second to 60 seconds, users have access to four different shooting modes:

The magic of a 360-degree camera is its ability to not just capture panoramic shots but to share them with friends and family. With an 8GB memory, the Ricoh Theta S holds up to 1,600 photos and is capable of recording an hour of video at full resolution.

According to Ricoh, the battery life is equivalent to approximately 260 photos while being connected to Wi-Fi. Millage on this aspect may vary, but plenty of consumers have gotten that much and more out of their cameras.

The Ricoh Theta S is supported by the iOS and Android compatible Theta S mobile app. Ricoh’s 360-degree camera can shoot, edit, and share all of your immersive content. It gives enough toys to play around with that will leave most people satisfied I feel.

Whether you want to shoot spherical images from the app itself or live stream HD-quality video from a computer with a USB/HDMI input, there are plenty of options for the user to view the content as it’s happening.

If you’ve ever been interested in adding a little creativity to the Google Maps application, Ricoh Theta S is compatible with the Google Street View app. This allows users to publish their 360-photos instantly to the platform with ease. This means it’s easier than ever to give life to the actual location where the image was captured.

Sharing your creativity with the world is as simple as uploading your photo or video to the Theta360.com website and then uploading your immersive content to whatever part of the internet you see fit. If the in-camera auto stitching isn’t enough then the Theta+ app is available to everyone interested in post-production editing of their content.

With that being said, sharing video content is limited to 5MB or approximately 10 seconds. Not enough for any major videos. It’s more of an option that some of the competition gives, but it won’t do more than a quick snippet of video to give a view of whatever you’re wanting to show off.

All of this is well and good, but how do I think the design of the camera holds up? Well, the Ricoh Theta S is designed to be super simple to operate. Not so simple that it lacks any extra parts, but just enough to where anyone can pick it up and learn how to use it fast.

With an easy-to-find image or video capture switching button and a full arsenal of shooting modes, there is a lot to appreciate about the simple design of the Ricoh Theta S. Even those who aren’t used to handling a camera of this type can feel comfortable when they get their hands on it.

Weighing only 125 grams and housed in a sleek, yet modern-looking body, the Ricoh Theta is highly-portable and well suited for traveling. This gives me the impression of a camera that is well suited for a person who is on the go a lot and needs a quick, simple, and effective camera to bring along with them.

With everything I’ve talked about so far, I think it’s a good idea to line up the pros and the cons that the Ricoh Theta S offers. I want to allow the most informed choices possible to be made, so I’ll be giving what I think are the biggest things for and against it.

I would say there is a lot to appreciate with the Ricoh Theta S. It’s a decent reliable camera that gives you access to plenty of options without overloading you with unneeded and unwanted features. It has just enough to make it worth getting while still being simple enough for most people to use with ease.

With all that said, I do recommend it for people that looking for a proper camera that is easy to use, portable, and isn’t the most expensive thing out there on the market right now. There is plenty to like about it, but as always I still feel it’s important to make as informed of a choice as possible. That’s why I also recommend looking at the company’s sight and other reviews, to come to as well informed of a choice as possible.