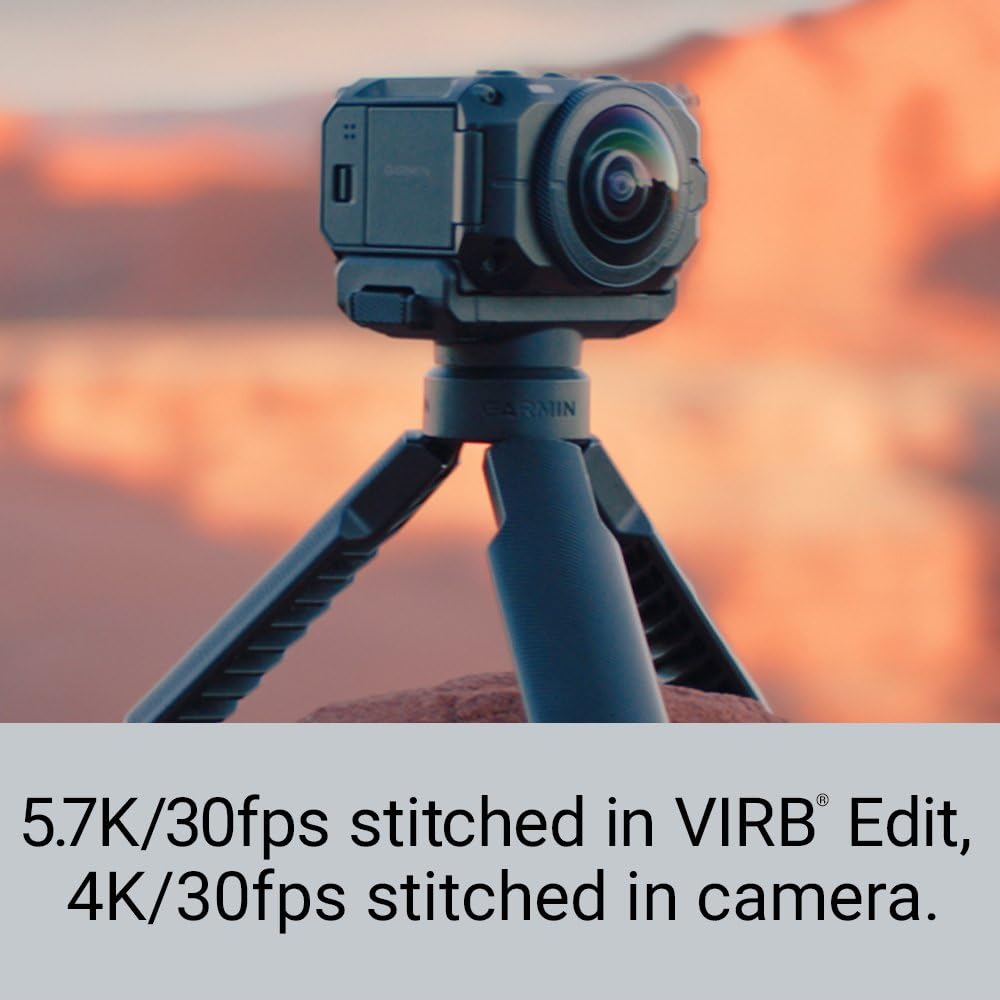 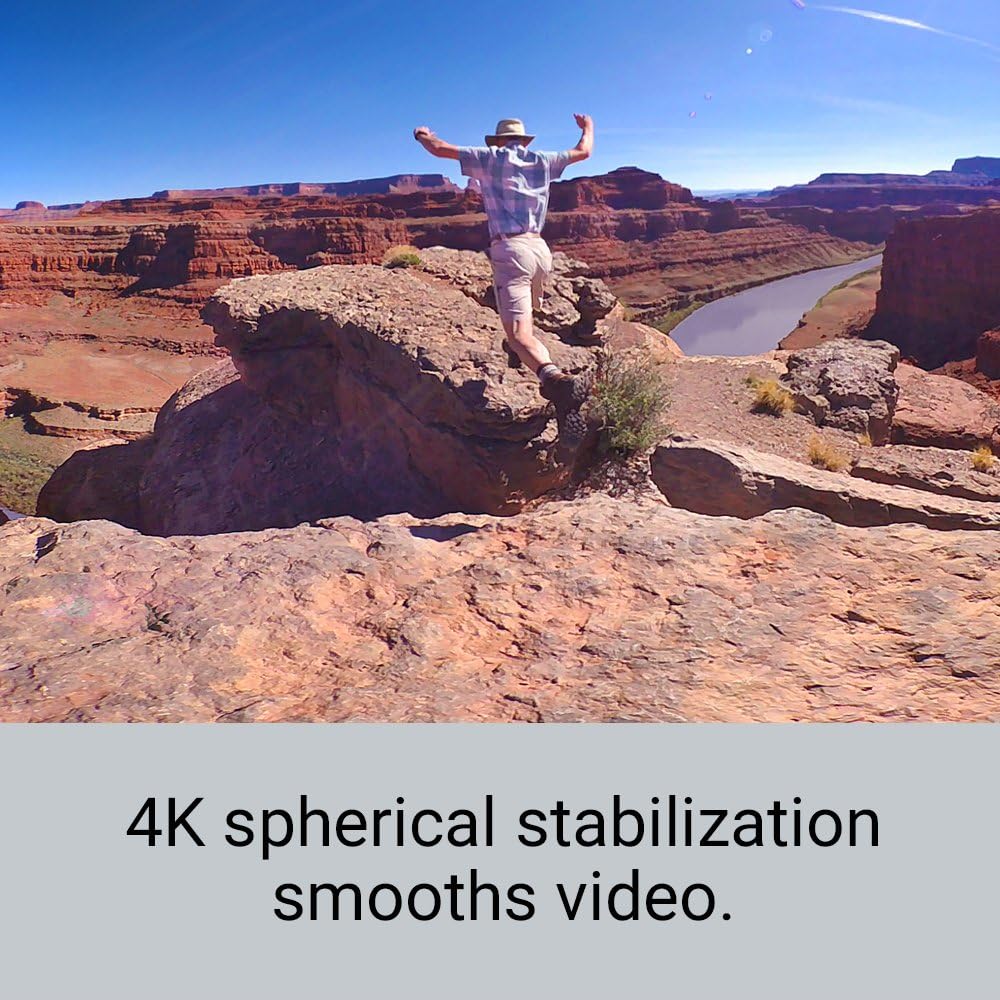 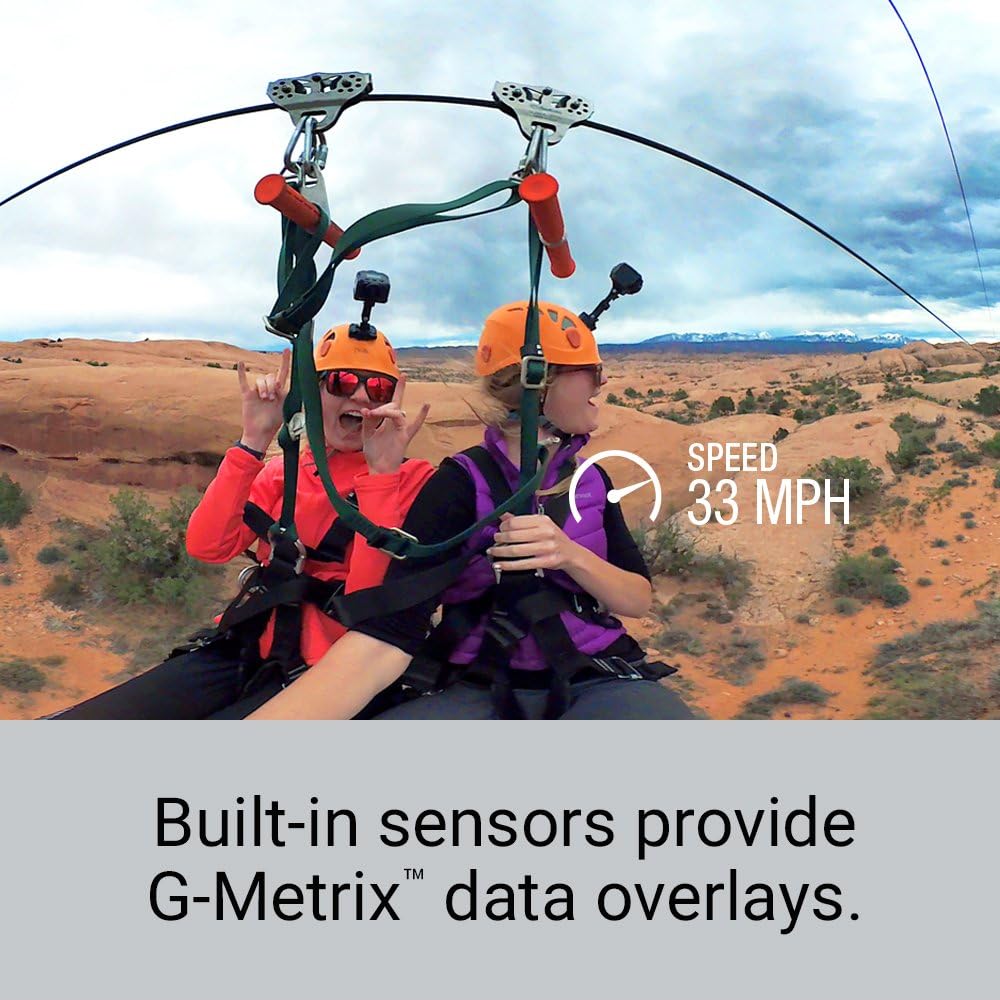 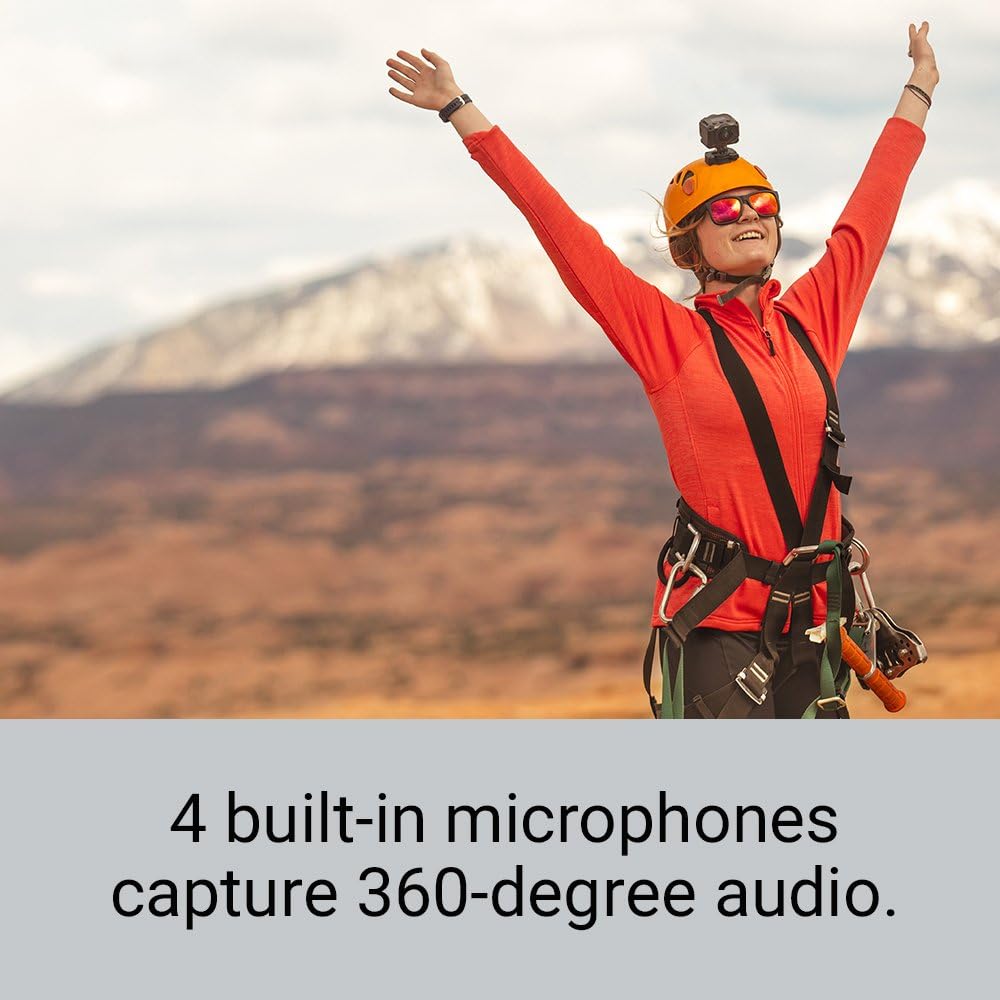 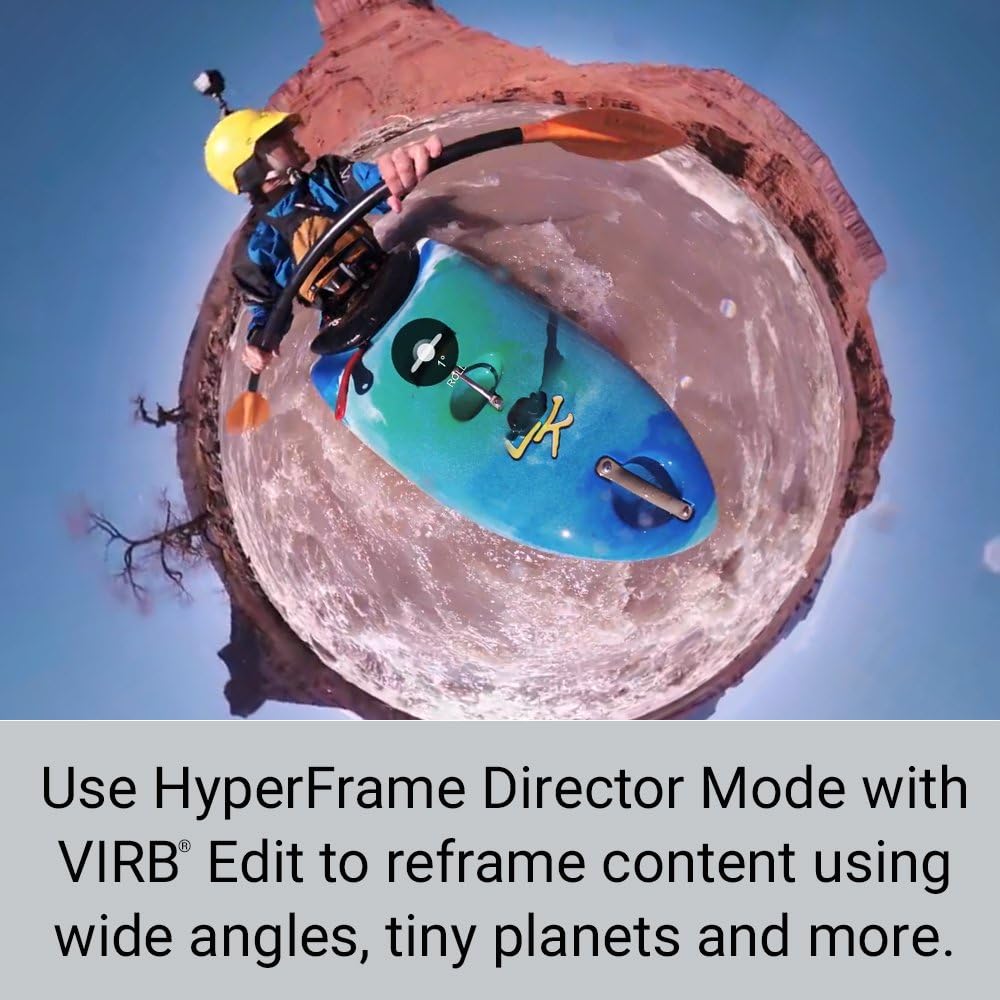 There are countless options for cameras out on the market, and they all have to have some mix of power, reliability, ease of use, or cost-effectiveness to stand a chance in a market where most people have a decent camera in their pockets. That’s where options like the VIRB 360 come in to fill a niche of specialty cameras meant to better take a picture with a full 360 view.

I think it’s an interesting concept on its own, but a camera needs more than one special feature for me to make it feel it’s worth it. So, how does the rest of the camera stack up?

The VIRB 360 is capable of capturing footage at a resolution of 5.7k with 30 fps. Garmin’s camcorder automatically stitches together videos at 4K with 30 fps.

It’s possible to also edit these videos by opening the VIRB App or downloading the desktop software. With this, it’s possible to make a better rounded 360 experience. From my own experience, 360 cameras tend to have a problem with stitching when they function like this. While it is a part of the camera to keep in mind, I’ve not heard too many complaints about this, at least not enough to make it worry me.

The VIRB quipped with four built-in microphones for capturing 360-audio and the ability to overlay a full arsenal of augmented reality data, the VIRB 360 is designed to bring your recorded content to an entirely new level.

There are plenty of other pieces of technology that have gone into the VIRB that I think are worth at least a mention here. From its one-click 4K spherical stabilization technology to its built-in voice recognition software, the VIRB 360 is a camera that comes packing a lot of neat tricks and useful attributes that far outshine any typical gimmick.

The technology that is used inside the camera is one thing, but what about the design of the VIRB 360? It’s not worth all the extra pieces of software and hardware if it’s clunky and difficult to use. I’m happy to say that few have given me a reason to think it’s a difficult camera to use in several ways.

If you want to shoot horizontally or vertically, Garmin’s spherical stabilization guarantees a steady shot regardless of movement. It’s also waterproof up to 10 meters, highly portable, and is strengthened by glass lenses that you can easily swap out.

I feel It’s meant to capture outdoor adventure shots and similar high-motion events. This is helped by the three stabilization modes Stabilize, Lock, and Follow. With these, you can smooth out vibrations, pinpoint the orientation of the camera in the desired direction, and follow the pre-set GPS location.

Overall, the design of the VIRB 360 is simple to get a grip on and offers a lot of utility. It’s also decently durable.

If messing around with settings is something you struggle with then there shouldn’t be an issue thanks to the numerous premade templates. With these, The VIRB enables users to customize their data overlay making the 4K footage stand out even more.

If you’re an adventure sports athlete or simply love the outdoors, the VIRB 360 responds to voice commands. This gives you a hands-free recording experience, and it is one of my favorite sounding features. In the midst of trailblazing down a remote path, simply say “Ok Garmin, start recording,” and you’ve activated the hands-free recording feature. Going further with the voice commands, asking the VIRB 360 to “remember that” tags that exact moment and bookmarks the footage for later viewing.

A lot of advanced cameras come with companion apps that either enhance the experience or are downright critical to it, and the Garmin VIRB 360 is no exception. The camera comes with an iOS and Android compatible mobile app that lets you edit, stabilize, share and add data to your captured video or images.

These features are also available on VIRB’s intuitive desktop software. Whether you want to turn your smartphone into a remote control, see a live 360-degree video, or connect to a VR headset for the full immersive experience, Garmin’s action camera plays nice with other third-party devices.

This doesn’t mean it’s compatible with everything, though. Even some of the products it is compatible with only work with specific applications. An example of this is that interactive 360 YouTube videos on a desktop require Google Chrome, Mozilla Firefox, or Microsoft Edge.

Overall, there is a decent amount of compatibility with both Android and iOS and plenty of interesting features to play around with. It’s something I say you should look into if you get your hands on a VIRB 360.

With everything I’ve talked about so far, I think it’s a good idea to line up the pros and the cons that the VIRB 360 offers. I want to allow the most informed choices possible to be made, so I’ll be giving what I think are the biggest things for and against it.

The VIRB 360 is a decent camera that is at about the mid-upper price range for technology like this. It’s not the newest thing on the market and has been out for a few years now, but the technology behind it is well suited for what it initially set out to do.

With its automatic resolution stitching, data overlays with G-Metrix, and third-party Android and iOS integration, The VIRB 360 is still an impressive camera. It helps take away the post-production headaches without compromising resolution.

If the VIRB 360 is sounding good to you still then I recommend taking a look at it further, and I don’t think you would be dissatisfied with a purchase. The price point might be a bit strong, but there are far more expensive camera on the market that are asking for far more for similar results.